Dinghy cruising being so much fun, if any unexpected opportunity comes up I will try and get afloat. A small cruise turned into a busy weeks sailing in Caravella, trying to get in all the creeks that I had missed the back end of last year. I had not realised that I had covered a hundred miles sailing in and about the river. The cruise involved spending nights on board, taking in many areas up and down the river including Sales Point, St Lawrence Creek, Bradwell Creek and Pewet Island, among others. 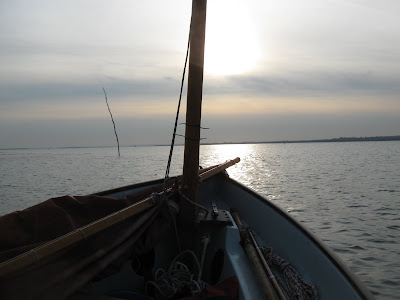 The most memorable and exhilarating sail was reaching all the way to Stone from Bradwell Creek at about 8pm on a flood tide. A fantastic sun began setting ahead, while stood standing at the helm. I think it was at this point I had realised I had totally tamed the Scaffie as she was obeying every touch on the tiller, being very forgiving when I sailed her hard on the wind, not daring to heel me overboard. 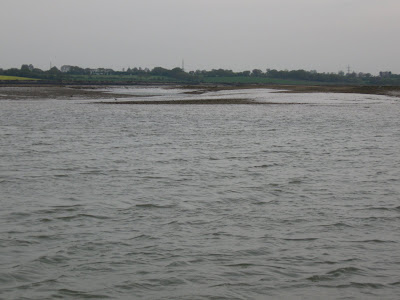 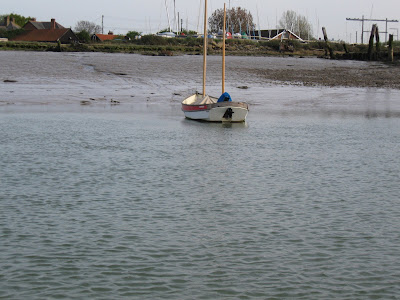 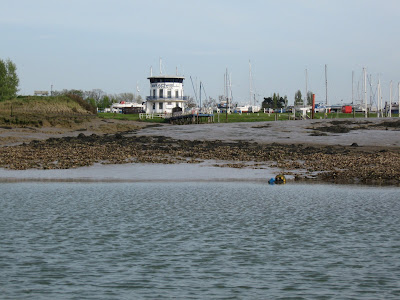 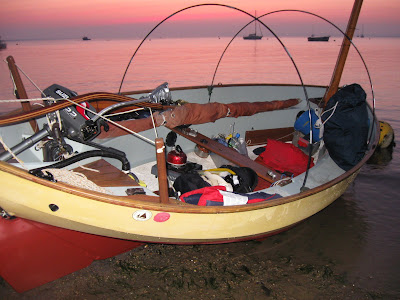 The Scaffie, a great cruising dinghy with lots of room and readily adaptable for camping on board.
Posted by Creeksailor at Monday, April 27, 2009 No comments:

Sitting peacefully at the entrance of the estuary is St Peter-On-The-Wall Chapel.
This ancient little building was built in 654 by St Cedd on the site of a Roman fort called Othona. St Cedd  had sailed down the East Coast from Lindisfarne in 653 and landed at Bradwell.
If you are sailing up from the Crouch or from further south you will spot St Peters before rounding into the estuary and seeing the taller two buildings of Bradwell power station. The power station has served its purpose since it began generating electricity in the early 60s, but thankfully it is now undergoing a decommissioning process. The contrast of these two landmarks could not be any greater really as the chapel sits in this remote corner of Essex facing out to the North Sea as it has done for over 1300 years echoing the values of simplicity, beauty and tranquillity. 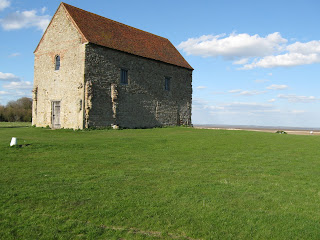 The shore here is a mix of seawall and cockle shell beach with plenty of mud thrown in for good measure. The old barge lighters that have been placed just north of the chappel are a sea defence protecting the shoreline.
For small boat sailors you can get very close to these at high water as there is about 2 meters depth, but do please check your charts as the barges cover at MHWS, and they marked  port red and lighted at night. The pictures below were taken at about an hour before low water springs.
The mudflats go out to sea for miles and there are great views up the Wallet, out to the Ray Sand Channel and across the North Sea.
You can also just about see the wind farm on Gunfleet Sands under construction (now completed) which is now another huge local landmark for mariners. 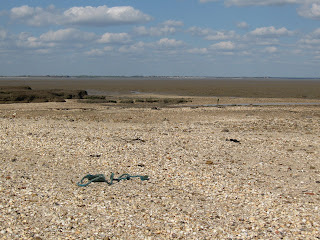 Mersea Island across the estuary mouth, and further to the right a large structure can just be made out at Brightlingsea. 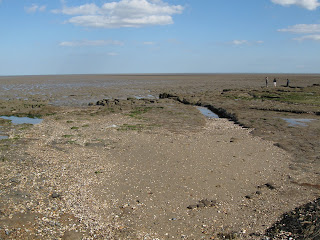 Gunfleet wind farm is just about visible left of this picture.
No reason why you couldn't dry out here for the night and get the barbi going. 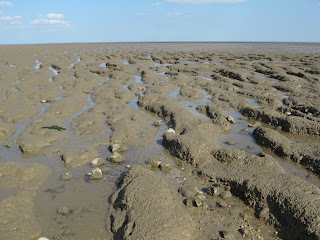 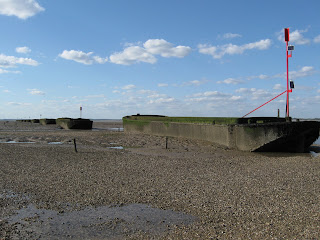 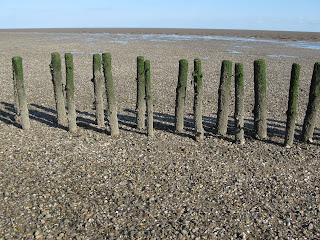 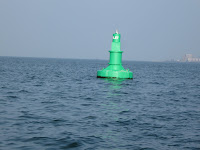 Thirslet buoy.
The buoy marks the edge of Thirslet Spit and the entrance to Thirslet Creek,
which like the whole estuary looks a lot different a low water.
Posted by Creeksailor at Wednesday, April 08, 2009