Tall masts of a different kind are a new addition to the waterside at Tollesbury. They are sited at the TSL yard, behind the Yacht Stores/Sail Lofts. A notice on the fence reads High Ropes Course.  You can reach close to  in a boat via Woodrolfe Creek and then into Bontings or Back creeks. Alternatively moor or park in the Marina and walk the short distance. There are a host of courses being held down at this, the salty end of Tollesbury by FACT - sailing, boating, climbing, corporate and more... Click on the link for more facts! http://www.fact.org.uk/facts.cfm 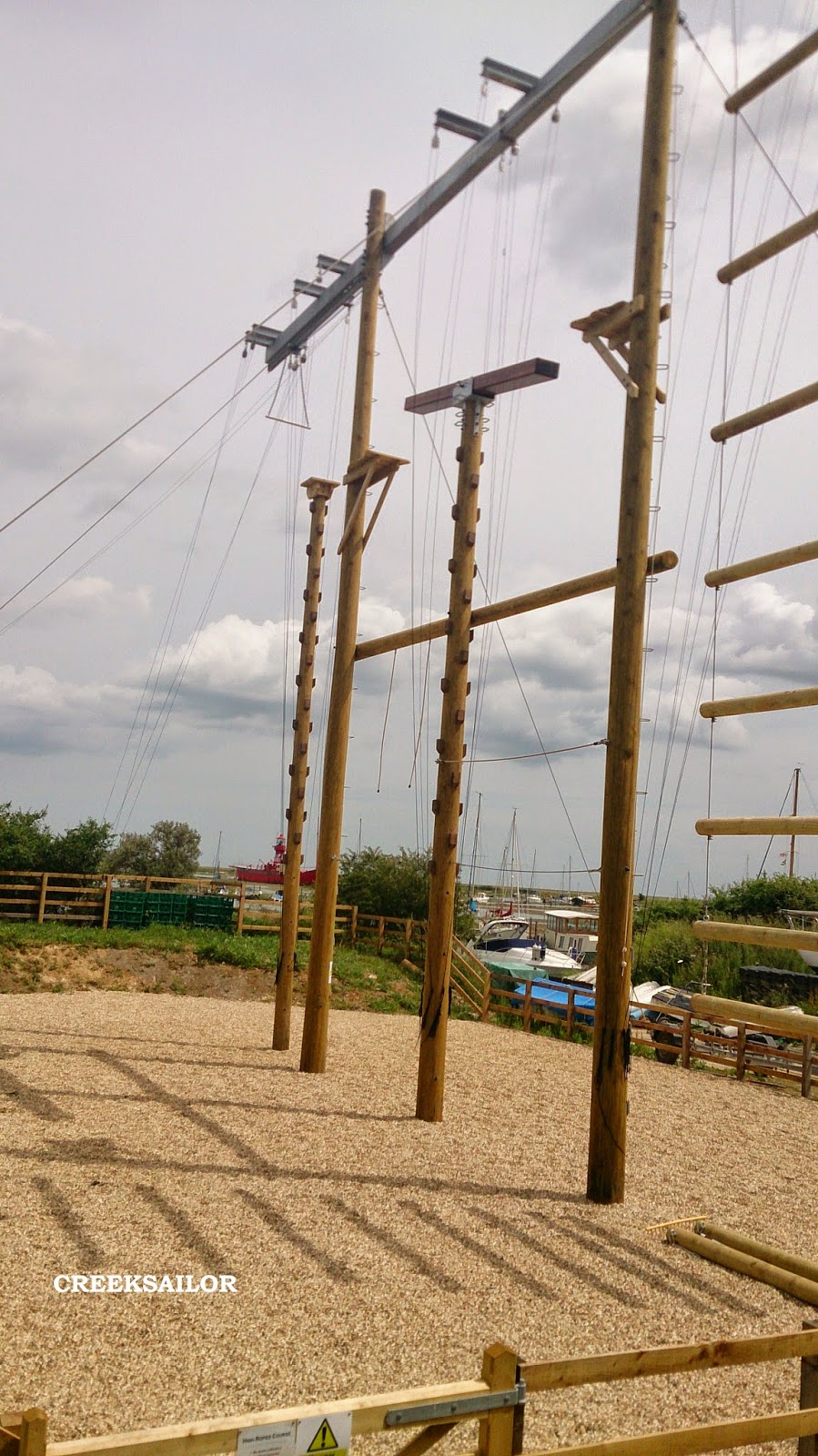 Posted by Creeksailor at Saturday, June 28, 2014 No comments:

Holehaven lookout station in Holehaven Creek is part of the National Coastwatch Institution, a registered charity, and manned by trained volunteers seven days a week. They currently have 49 stations placed around the coastline of England and Wales maintaining a visual a lookout during daylight for yachtsmen, canoeist, fishermen, in fact anyone that may come in to difficulty on the water. Other stations in our area are at Whitstable and Herne Bay in the south and a little way east, along the Thames from here, there is one at Shoeburyness. Further up the coast there are stations at Felixstowe, in Suffolk, and in Norfolk at Gorleston, the main port where all the Broads tides are worked from. Please give them a look, and spread the word about their valuable work if you can. http://www.nci.org.uk/holehaven 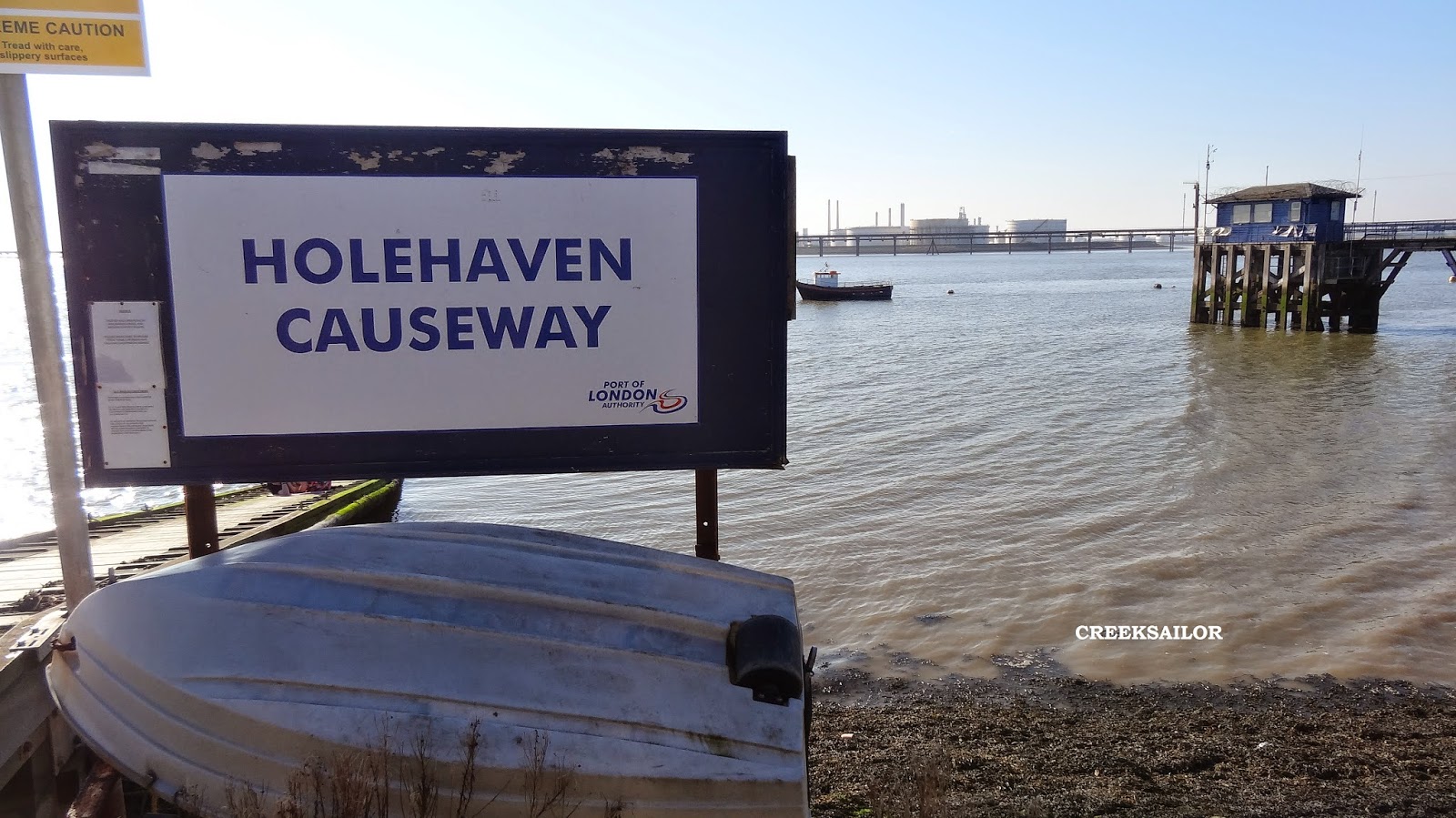 Posted by Creeksailor at Thursday, June 26, 2014 No comments:


Many of us who leave a boat out on a mooring  suffer from the over enthusiastic attention of those birds we love so much. Well, they do love us in return but you know what it's like. Viz; you approach the boat, only to see them sitting on the boom, or up top the mast, fidgeting and shuffling giving you a wry wink and that knowing nod as if to say 'I've just used your boat as a latrine for the last five days - I'll be off now'.  And that neatly secured sail cover? There are occasions when it seems they cant get enough of us especially during the early season when their love for us simply overflows.
In a return show of affection to our feathered friends the boats down the creek have been adorned with many forms of BIRD OFF attempts - kids sand castle windmills, dangling rope, CD' discs, Tesco bags, and that old chestnut used nationwide, and full size life-like plastic model, some even say a good resemblance of an old sea dog, 'The Owl'.
I liked this little invention that Mike 'Creek In Flood' has been testing lately down the creek. Mainly because it is simple, cheap and is a second use material. All good small boating virtues. Tests have not been in the manner of your usual 'sailing trials', more in the way of 'mooring trials', and results so far have been positive.
Mike says this is his baby - this foil wrap idea that is - but I secretly think we can thank whoever it is indoors who makes the sarnies for his day sails...  Instead of binning the foil from his sandwiches, Mike, never known to have sailed on an ebb tide,  has found that with a few folds in the foil and then wrapping them around various parts of rigging, this has been enough to give those little tweeters the jitters and their bombardment of love letters have dwindled down to just the odd note!


Update 26/06/14
Mike has sent in up-to-the-minute reports of his ongoing tests. After studying them at length for a minute, and doing a few seminars with power point presentations, I can reveal the prototype needs more work before we can send off for patents and unleash this invention on to the yachting public.
The major problem being the residue left on the foil from salt beef sandwiches seems to exacerbate the bird nuisance to higher levels than without using foil...
Well, as you can imagine I am disappointed at this major set back as I was planning on putting a Fiver in for 50% of the company. However, keeping in a positive mood, tests are ongoing and I can only hope that he gets more of the honey roast ham sandwiches!


You can catch up with Mike at this weekends Small Boat Sailors rally in Hickling, Norfolk. He has also written two enjoyable and informative articles for the Creeksailor guest writer pages that can be found here Guest Writer

Labels: Down the Creek with Creeksailor - Cruising Essentials

A reminder to anyone  who is thinking about joining the Small Boat Rally next Saturday, 21st June, Hickling Broad. Do come along.
Note: If you fancy staying the night, as some are, but aren't set up for camping on board, I know one person is intending to put up a small tent... If it's of use I have another that can be loaned out for the night.

A short clip from the River Ant, Norfolk. As the new day spreads light over the river, mist adds suspense to what it will bring.

As the heading says this year the Small Boat Sailors gathering will be on Hickling Broad.

The very nature of cruising means that skippers generally like to do their own thing therefore nailing people down to dates is always going to be difficult, and although our connection  may be loose, as long as we end up having a sail in company, and if possible a bit later, a beer and something to eat after in the Pleasure Boat Inn, we would have achieved our aim of meeting up in the memory of the late small boat adventurer Charles Stock.

Date: Saturday 21st June 2014. That's in three weekends time.
Meet time: Whenever you can get there but on the water around lunch time would be good.

Note: Remember to bring your puddings, and wellies are optional for the Hickling meet as for East Coaster's the novelty of stepping on and off a boat in a clean pair of boat shoes, on to neatly carpentered staiths, is a luxury they may want to make full use of. I already have!

If you have a boat parked on the Broads somewhere then please do head up and join us, even just to say hi, we'll be pleased to see you. If you are thinking of trailing and launching on the day then I would recommend Whispering Reeds Boatyard who charge a reasonable fee to use their slip, and can sort out parking and day permits etc.

Hickling Broad is the largest of the Broads  and sits in a somewhat quieter, but ever pleasant wildlife haven. This reed-fringed marshland environment has some interesting dykes to poke into and is also north of the iconic but busier Potter Heigham Bridge. As far as depth and tides go; I'm yet to sail out of soundings of my 6' Broads Poker. And the tide; this is hardly noticeable and sailing over the small rise in inches of water level is not something we need let concern us on the day - unless you are heading down to the Thurne or under Potter Heigham Bridge that is.
Please make your own checks to be sure you are happy with everything as we all meet on a friendly basis and as 'no-one' is in charge 'no-one' can be blamed if in the unlikely event it all goes belly up for whatever reason.
Remember, all are welcome to join the Small Boat Sailors Group no matter what type or size of boat you choose to own.
Let me know if you are coming as I might be able to get a group discount for launching and we might need to book tables and moorings in advance.
Looking forward to seeing a few of you on the water. Good sailing, Tony
Posted by Creeksailor at Monday, June 02, 2014 No comments: