This clip is from a trip made a few weekends ago. Hope you enjoy it

Posted by Creeksailor at Saturday, July 20, 2013 No comments: 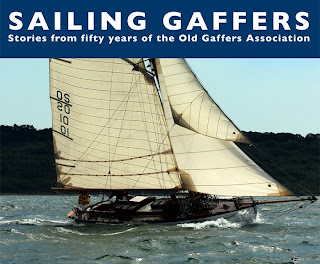 If the symbol of a country workers pitch fork flapping high in the rigging of a boat with square sails means nothing to you then by the end of this year it just may as 2013 is an extra special celebratory year for The Old Gaffers Association who are holding events around the country to mark the occasion.
As well as the many gatherings on the water taking place there is a UK circumnavigation in progress as I write that will culminate on the 15th of August at Cowes on the Isle Of White in what is predicted to be the largest gathering of gaff rig craft for decades.
In addition to all this on the water fun and frivolity Association member Viv Head has produced a fabulous book which celebrates half a century of the OGA.
Titled: Sailing Gaffers – Stories from 50 years of the Old Gaffers Association the book begins with a foreword by a firm favourite of mine Tom Cunliffe and soon goes on to tell us of the humble origins of the OGA which for those that never knew how this worldwide band of spar-aloft sailors came about will be interesting enough, but it is the numerous contributions from the members themselves that gives the reader a fair insight into what it means to be a ‘old gaffer’ today. As the pages turn in succession there are headings such as ‘Hookers’ and ‘The East Coast Connection’ – a gangster twist I hear you say? Come on… yes, you guessed correct these Hookers are a type of gaff rig boat and the East Coast Connection is one to the Old Gaffers on the south coast. How could I even think up a thought like that…
Sailing Gaffers continues to draw you in though with 304 pages literally stuffed full with interesting and at times amusing tales from traditional sailors and their beloved traditional boats. Among the many colourful photographs that illustrate the book are some well-known boats too, some of them favourites to more than a few of us. Key figures no longer with us are fondly remembered too and one or two familiar faces, not just in the OGA but in the sailing world in general, also share some of their experiences. If you sail a gaffer or are simply interested in boats then this book will be a valued addition to your library.
Sailing Gaffers – Viv Head – Paperback - 304 pages. Published by Quartet Books and will be available from August 2013 priced at £20.00. Copies can be purchased here  www.quartetbooks.co.uk  or here http://www.eastcoastclassics.co.uk/news/sailing-gaffers-sale-now
Posted by Creeksailor at Friday, July 19, 2013 No comments:

A new header picture to celebrate the summer.  It was a great bit of fun capturing it as it was taken very close to West Oaze buoy in the middle of the Thames Estuary. One slip and I may have been been a duffer perhaps, who knows. Anyhow that is now history and these angular shots, taken from the quant, are now a signature view of mine. I'm pleased with the original, angled views which it captures and have had great amusement capturing many others while on passage. I've taken some others to with some unlikely pieces of kit - more of those later though. Boys and their toys...
Posted by Creeksailor at Monday, July 15, 2013 No comments:


It was the late Intrepid small boat adventurer Charles Stock who first penned the term Kneecap Navigation. In his book Sailing Just For fun he devoted a whole chapter on the subject. I have adopted those same methods for I cruise in the same small boat but other small boat sailors would be navigating in similar conditions. Enjoy the clip. And get your name down!..

In answer to various requests I've put a series of videos together. This one deals with the topsail.

There are a couple of variations to this traditional seaman's knot which I use but this version I find is the most simplest and quickest way to bend on the topsail halyard to the topsail yard - and I can tie and untie it in the dark while under way to which, perhaps, is just as important and worth considering if choosing which knots to add into your repertoire..

Note: Terra Firma - useful in non sailing situations to where you need a tight, secure hold on a spar or post with a rope.