Part of a sail down London River, during the Essex Loop trip. Shows an approach into Havengore Creek. Enjoy. TS

Posted by Creeksailor at Sunday, November 25, 2012


As The Wheel of capital growth turns the tide on fortunes that are made or lost, its turning also affects our landscape and how it can change for better or worse. We can’t help but notice some of these effects and at the same time seem ignorant to others. If you sail in and around the River Crouch one change that can’t go unnoticed is the Wallasea Island Wild Coast project. The project began in 2005 when a new seawall was built 300 yards or so further south before the Island’s seawalls that line the River Crouch, opposite Burnham, were breached in 2006. Breaching the seawalls in this way is not only creating the new habitat for wild birds but also a new area to explore for skippers of shoal draft boats. In addition to the new inlets created along the River Crouch side of the Island (north), there are artist plans that show the project will create up to six new creeks, using soil from London’s Crossrail project, that will exit into the River Roach (south), by the time of its predicted completion in 2019.
Breaching seawalls in this way has been done before in the name of Managed Realignment in other rivers in the hope that giving a little back to nature will in effect hold off the rising sea water levels for longer and at the same time create these additional areas that become new homes to wildlife. In the case of Wallasea Island, which is now managed by RSPB, the creating of these wetlands is seen as giving back to nature what was taken in the earlier development of the ports of Felixstowe and Sheerness.
There are other examples of sudden change in our rivers and creeks; perhaps the ultimate unwanted change for the majority living within a 40 mile radius of it at the time was the building of Bradwell nuclear power station (now closed) in the Blackwater, the painted white 'modernist' building of the Royal Corinthian Yacht Club in the Crouch dropped as many jaws as it did raise a smile, as did the marina development in Brightlingsea Creek which had skippers and crews simultaneously scratching their heads in a mad search for sanity as they made way up such a beautiful creek. People have frowned on other changes such as the building of the Olympic site (a good example of city landscape view changed), the Millennium Dome, The London Eye, the Shard etc, etc. It can be a wonder that with so much change one can still find places unchanged, but still, when he sets a small sail he can be wind-blown to the forgotten corners of our coast.  Even so it’s getting harder and one must learn to yield to it for wherever we go today the landscape is continually changing, be it naturally or by man’s intervention. Intervene and we are creating our own history for future earth dwellers to wonder over, just as I wonder at structures and objects that were placed in our creeks decades or centuries ago, so although I still can’t quite come to terms with the landscape changing so rapidly, (I’m told this is a sign of getting older) or with the physical impact of landscape changes such as densely encroaching housing, wind farms obliterating the sea view. Are these unreasonable thoughts? It’s nigh on impossible today to find somewhere that has not been changed I here you say...

With Crossrail's involvement in the forming of the new wetland on Wallasea it is no exaggeration to say this is the largest movement of earth for decades.  Two new tunnels being bored side by side for a distance of 21 kilometres will result in 42 kilometres of tunnelling spoil that will be transported by sea, down the Thames for a short jaunt up the coast to pick up the Crouch’s newly placed system of navigation buoys which will lead them into the River and up to the new purpose built jetty on Wallasea Island where it will be dispersed. Cranes are sited on the Jetty to undertake this enormous task. As the coastal barges dock alongside the cranes will place the soil into a huge conveyor belt system which in turn will then strategically place the soil to create the new landscape.
For me the whole Wallasea project raises just one point. Take a moment to look around in the unique archipelago of islands and creeks that make up this very special part of the UK, as I have done in my boat and on foot, you will see they are a mud filled saltmarsh-fringed haven for seals and other important wildlife such as wild plants, the curlew, gulls, geese and ducks. Aren’t we creating something that is already there?

Posted by Creeksailor at Wednesday, November 07, 2012 No comments: 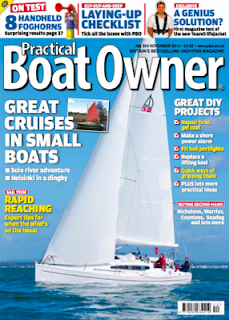 Shoal Waters makes an appearance on the cover of November's Practical Boat Owner magazine. Ok, it is only a small one, well she is a small boat so it's quite sweet, but inside the magazine they have published the Essex Loop trip with a four page feature that includes some good photos. I love the little illustrated maps they have used with the placenames and my track marked on them.. Brill. If you have'nt already got your copy take a look, and I hope you enjoy it. Here's a link to the PBO website here
Posted by Creeksailor at Wednesday, November 07, 2012 4 comments:

Some of you may have read the Wild Sea Coast article I wrote for ECS magazine's September edition. Some of the pictures were of Hoo Creek. Join me in this video clip for a gentle sail along one of the East Coast's more remote creeks.

I call this stretch of coastline that reaches from Shoeburyness in the south to Bradwell-Juxta-Mare in the north, The Wild Sea Coast. It is wild in many ways for it has very few people inhabit it, hardly any roads with public access that reach the seawalls, very few buildings to spoil the wide open spaces. Wild plants thrive here, rabbits, foxes and deer roam freely and adders swarm undisturbed in marsh and flat arable land that spans for miles.The shallow nature of the sea along this stretch of coast and the short window the tide allows means it can be difficult to explore in a sailing boat. However I have managed to explore every creek that pierces it in my boat Shoal Waters, and have rambled up and down its length many times on foot. Of the hundreds of creeks I have explored Hoo Creek can be categorised as very remote - a spartan beauty. Every creek has something different about it. It may be a particular bird species, a wreck, deep mud, a shingle beach, a wharf, trees, buildings, a ghost even. Whatever it is they all have one thing inherently in common which is the salty tide that flows into it twice in twenty four hours. Creeks (our inshore coastline) are also places where one can almost experience the past, while at the same time enjoying nature, by getting that feeling of actually touching history. Enjoy the film. TS