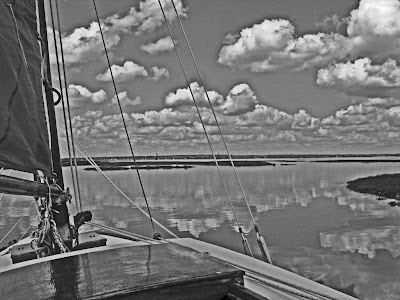 For City Dwellers and visiting merchants of the sea, mariners, traders and watermen, the River Thames has been the backbone of London for generations. It would take more than a chilly easterly and teaming rain to hold back the 1000 boats that had been invited to attend and celebrate this Royal Diamond Jubilee event. It was no surprise therefore that more than a million people turned out to take part in  the biggest gathering of boats to be held on the waterway since Canaletto's magnificent illustration of the Thames over 250 years ago.  I literally fought my way through the back streets of Wapping, climbing pier and wharf to ogle this majestic frenzy of boat pageantry and mustering. The vantage point I had been invited to was along the Avenue of Sail, at HMS President and HMS Hurworth, within a rope-throw from Her Majesty and the docking point of Royal barge Spirit of Chartwell.
What could have been fraught with mishap ran incredibly smoothly through good management maybe, but perhaps even more so due to the Thames Barrier being raised. This slowed the pace of the river, which can often race along at 4knts, and also seemed to me to keep levels lower than would normally have been the case.
I couldn't help but investigate two small creeks earlier during the day, hidden along the Oliver Twist like wharves making notes for potential exploration in Shoal Waters. When inside ST Kathrine's Dock many boats were seen on display such as Queen Galadriel who lays up for winter at Fullbridge, Maldon and single-handed circumnavigater Sir Robin Knox-Johnstone (a true sailor) was greeting people near Gypsy Moth.
The East Coast had a very good number representing, these were moored along the Avenue of Sail and included, to name just a few, Cygnet, Pudge, Hydrogen, Boadicea, Endeavor, Pioneer.
The Little Ships cruised passed gallantly echoing the sacrifices made by many, and the inland canal barges had a great showing, but I must have missed the small cruising yachts in the pageant as none came to my notice (but these could well have been obscured behind mist and rain) other than two dinghies both Drascombe gigs who were under motor and one longboat who had strung lines set which looked to represent sails.