Much of Englands East Coast, in particular a stretch from North Foreland, that piece of Kentish land that points towards the Dover Straits and marks the southernmost limit of the Thames Estuary, and northwards to round the tip of East Anglia, unlike our islands deeper blue water southern shores are in the main a murky soup of mud, sand, gravel and shipwrecks. To seaward, among this brown broth, huge sandbanks appear on falling tides creating a mirage of illusions on warm dreamy days. But often localised clear patches of water can be found where the water has an aquarium like quality offering the viewer scenes of the seabed that are the norm to our southern county neighbours. Set in the middle of this coast is the county of Essex which just happens to have one of the longest coastlines in Britain at roughly 300 miles long. Not a continuous straight line of coast but a fascinating maze of inland winding rivers that twist, sometimes busily with shipping , but in the main they are quiet like the hundreds of smaller creeks that branch off peacefully to become calm backwaters that are havens to estuary dwelling inter tidal wildlife. Fond memories of childhood play here are of paddling a dinghy or fishing for eels along the borrow-dykes below the seawalls, or jumping the ditches that interweave the miles and miles of saltmarsh and on getting a wellyful meant blistered feet during the walk home. Climbing the wrecks and getting splinters, or crabbing off the sluice gates beside the creek with stringy bits of bacon set on rusty hooks. Running as fast as you can around the foot of a Martello tower to see who gets to the doorway first. Counting the squares of rag walling before falling into the sea to be nipped by crabs or stung by jelly fish. Happy days! Nigh on half a century on and having traveled the world I am still playing in the same places, although now in the comfort of a small wooden sailing cruiser. Some things may never change though as I still get the odd welly blister.

Today the hundreds if not thousands of us boaters that are based on this shallow coast enjoy the myriad of tiny creeks. This is the realm of the 3 ft depth waterman, perhaps the ultimate domain of the self-respecting ditch-sliders, shallow sailors, thin water sailors and ditch-crawlers. Some call it mud hopping, the Americans like to call it gunkholing, whatever term you wish to describe it we are all the ubiquitous creek-sailor. We amble along them on the whims of the wind wondering at the whys and hows of a shoreline that can blend so beautifully into the surrounding marsh meadows and farmlands. Seeking adventure where to some they have become a sanctuary where faith is restored in an often twisted world. A common sight is to see a skipper of a small cruiser stabbing ferociously into the depths a garden cane in search of more water, the stick is waved almost as a magic wand to produce even murkier, pasty swirl, to take him even further into his idyll.

The shoal water creek sailor carries an armory of hand tools to help him in his never ending quest for that thinner piece of water, ‘thirsty water’ near dry sailing, giving entrance to the thickest of muds or the most sheltered of sandbanks where no other boat has ventured for decades, if at all! The auxiliary, if one is carried and of any help thus far, has been long clipped in its up position and forgotten. If one has well fitted bulk head compasses they are now next to useless, but a snatched bearing taken quickly by hand is often fruitful.

No 12volt cabling sending haywire signals is of any use to this skipper, having tried an audible sounder I found I only used the cane for spending 90% of cruising time in ankle deep water 3ft or less it is of no use. In deeper than 'stick water' sink the lead, for now, here, the skipper is in all seriousness, at the very pinnacle of his chosen art, hands on, close quarter working with bean stick sounding cane bought in bulk from garden centers as he can get through many in a season, thrashing to his favored side, not clumsily but well-practiced setting the stick at precise moments to read accurately, either from the knuckle in the cane or from the white painted markers set at foot intervals. He alternates this with powerful long strokes with the short oar in full command of his little vessel. Every now and then a short pause is made as the mud below grips his keel. Mainsails are now lowered or taken in with sail ties clove hitched, the jib can come in a little to, or stay set just in case. Suddenly, a comprehensive array of tea making facility’s take over the main focus for a short while, and soon enough the little boat wobbles back to life. If not already worn water-boots or thigh waders are now donned in case there is an urgent need to hop overboard to free the boat. Frantic jabbing movements are made with the 15ft long quant pole either from the side decks or cockpit often now to no avail as things overwhelmingly have become 'real dirty', and only those of a certain pallet, and they are few, endeavor on for they sense the rewards for their effort is near. The rudder is now tied in her up position, the centerboard is fully up, cleated tight. A stiff jerking pull from side to side with the tiller in what remains of the ‘water due’ and the rudder throws thick ooze sloshing along the raised bank.

The boat is now almost lying in resemblance to a stranded sea bass or mullet with dorsal fin rudder now hanging hopeless and next to useless. But all is not lost as this was your intention, you have achieved your aim, you are at the very limit, the extremes of your salt water habit and surrounded by the glory of man and woman that is sea-country. Immediately the greeting call of the reed warbler rings out and shank scurry along wading the muds. The ever-ready skipper cleans the tools that have become extension to the creek sailor’s arms (now there's a name for a pub) as scents of mud aromas drift across creek and marshland. Can you ever leave this seaweed filled saltmarsh-fringed murky coast? My answer is no. Elsewhere seas are bluer with whiter waves and warmer waters but it can never equal this brown shoal studded, mud-lined creek haven, where one can run aground at will and put the kettle on for a brew.

Part of my collection of close quarter creek-sailing tools which include a variety of paddles and oars. Note the boat hook also marked up to double as a sounder. Over the years I have got through many sticks through them falling overboard when healing in rough weather or through the heat of the moment carelessness. Often time is spent searching over covered ground in search of a favored stick that has served so well. Its always a feeling of elation, or scoring a goal, if you do happen to find them again. I have played about with sticking pieces of lead or taping a thick piece of cork to them to stop them sinking through the really soft stuff. I have also tried with bits of line as a handle to hook onto a part of the boat. but its not necessary.
With an unbroken bond to the sticky Essex muds I am truly fortunate to have been taught pea stick sounding skills first hand by the grand master of the shoal water art Charlie Stock, who's last sounding cane used I now have proudly in my possession 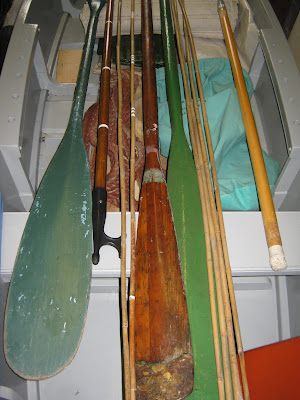 Classic East Coast mud. This patch of mud is still as pure as nature intended. Learn to love this stuff. The sounding cane gives reliable readings when prodding and the technique is to sense the bottom with 'feel'. Surprisingly enough a thin bean stick stops an inch or so in when under its own inertia. Trying to weigh up its texture and depth before attempting to cross it on foot is a good practice. Wading through deep mud is never an exact science, but sweet and 'smelly' in its most endearing sense it is. I guessed correctly (this time) that this would go at least knee deep and be a patch of welly stealer, a Dick Turpin of the low tide sea-ways. Here is a substrate where maintaining movement and agility is everything, a pair of wooden splatchers would slow down the sink effect considerably to. Then again play safe and find a harder patch nearby. 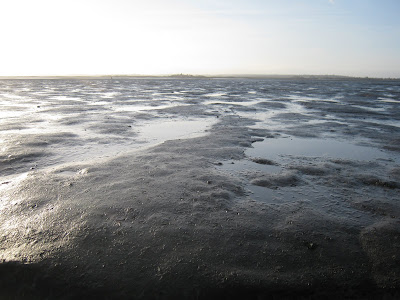 A minimal draft of 12 inches allows one to dwell in the habitats only accessible by waders. These turnstone are not in the least concerned by our presence. Even in the punt I am not able to get this close. I put it down to the bowsprit and rig, as I could get just as close in Huffler. Maybe to these lovely little creatures the boat must have a motherbird-like look about it. Its probably more a case of they are so used to seeing Shoal Waters about the margins here in a foot of water that the boat no longer poses a threat to them. 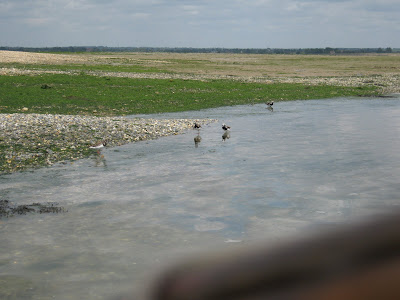