A poem from the Essex marshes.  by Tony Smith 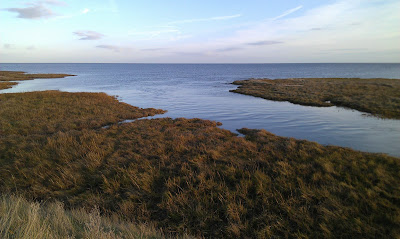 MARRAM GRASS lay horizontal, ironed flat by relentless winds and browned by days of hot suns. Thick spume skims across creeks that interweave softened ground, searching, creeping and inevitably finding ways into vast inland spaces, quiet places, long abandoned but home to the yellow horned poppy that sit hidden but from the glance of a casual coast wanderer. Once again a sea, arriving from far far away, trickles its brown salt waters to become smooth shining silver, dazzling one’s eyes before slicing through fine cuts and filling small rills, the numbers of which too numerous to count and from where brent geese sit gathered, huddled tight. They watch its swishing, hurrying and winding, gaining pace to glint as it bathes sea purselane, glasswort and seablite passed on its journey before finally it topples the rooted green blades that decorate the shadows afoot of that mighty barrier of the sea-marsh, the seawall.
Bleached driftwood sits limp, cast high to muddy sides, still just out of reach. Beyond the seawall, farmland spread by yeoman craftsmanship, billiard board flat to span unending misty acres until interrupted, a solemnness broken by a brick shell, defiant but baring scars from a generation of unrelenting storms, gone unseen in this remoteness, its rusting roof panels bizarrely torn, awkwardly pointing upwards and seaward.
Veins now beat with the excitement of nature, of life; nostrils tingle to smells of sea fauna and crustation of tended earth. Suddenly salt waters ebb, flowing, swooshing. Brimming creeks ripple evocatively to the power of wind and the suck and pull. One now hears the roar of fleeing salt spray spilt back whence it came, crashing, escaping, carving its exit. Voles scurry into holes, geese squawk and cronk, shuffle and shift as the hen harrier hides among hedgerows that line the ditches, now reddened by fading sun light that fights, battling with dense stark clouds and the richness of a deep blue sky streaked white haphazardly to the round ends of earth.
Salt now burns dry, scalded and crystalised. White painted mud cracks and splits to the last of the tide. Godwits bend and peck, arrow grass wavers while cord grass stands bolt upright. Across the seawall stonechats move from bushes and just then the tide has gone. Seaweed remains strewn and tangled with shells - the wild birds feast on cloying mud. A strike of a match and the oil lamp is lit, hauled gently forward and cleated. The warm flame flickers as one climbs into the cabin to zip up into the snug and fluff of the sleeping bag to lay gaze fixed at its glowing, alone on a windswept sea-marsh. 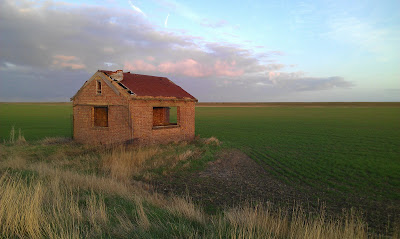 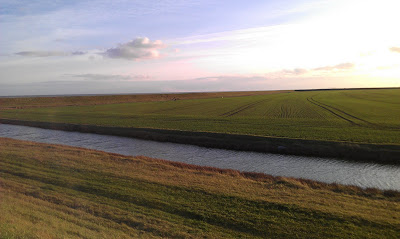