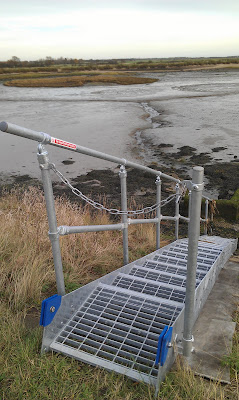 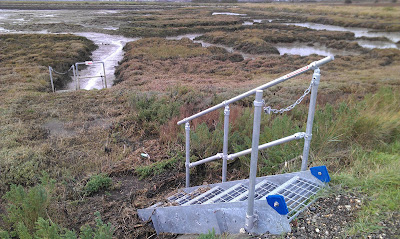 Posted by Creeksailor at Wednesday, December 28, 2011 No comments:

A Sailing Season In Shoal Waters

I wrote this article for the Tollesbury S C's Windward newsletter; November edition, but I know some of you will be interested to read it.

Well, the sailing season has come to an end again, all too soon for most of us I’m sure. For me, 2011 began with the purchase of what is for the cruising sailor perhaps one of the East Coast’s most iconic little sailing vessels, the 16’6” wooden gaff cutter Shoal Waters. Taking on any boat has its responsibilities but a wooden boat does have to be tended to that bit more, especially the older they become.
Shoal Waters was home built by the venerable Charles Stock in 1963 after purchasing the ready formed Fairey Falcon hull which were made of hot-moulded agba veneers.
Charles went on to sail her for 47 glorious years covering over 75000 nautical miles, all without the use of an engine or modern gadgets such as depth sounders or GPS systems, before his retirement from sailing in 2010 due to progressive ill health.
The previous season I had explored every creek in the Blackwater with my 16 foot pocket cruiser, also gaff cutter rig, Huffler (now gone to a new owner). This culminated in the publishing of my book which describes my type of creek sailing, called ‘Ready About on the River Blackwater’ back in July.
During the very first cruise I took in Shoal Waters, it had dawned on me the sheer magnitude of Charles’ achievement in covering all those cruising miles in such a tiny little boat without the auxiliary back up and the other modern gadgets that many of us have come to rely on.
After a season sailing her, I can confidently say that each time I got down to my mooring in the creek, to go cruising, she had not been away somehow magically sailing more sea miles but was sat still, awaiting her skippers next command, for although a boat may be capable of covering a fair coastal passage it is only the enthusiasm and energy of the adventurous skipper that makes it happen. Exactly what Charles did during all the memorable years he had with her.
Since her launch through the’ Hatches’ at Goldhanger Creek I have cruised to most of the creeks inside the river, my current favorite being Mell Creek, right up beside the old dock. Like many of my other haunts, I never see another boat in here. As well as the farm on the picturesque hill beside the creek where pretty white cows moo contentedly, and the wildness of the nearby wick marshes from where I have seen an owl fly over the creek in broad daylight, Mell Creek is especially handy for a trot up to the village to gather fresh supplies of bread and milk at Fred's Stores in Mell Road.
When the weather has allowed I have made passages out of the river and over the mudflats to squeeze through the Rays’n and visit the rivers Crouch and Roach where a myriad of moody, evocative creeks and desolate islands lay waiting to be explored.
The River Colne also has some interesting creeks that I have visited three or four times this year and one of the highlights for me has to be reaching the top of Fingringhoe Creek, under sail in little more water than a heavy due. This pretty little waterway is better known as the Roman River and is set in a delightful valley. The sight of the former tidal mill as you round the last tight bend is reward indeed for one’s efforts. I have also ventured up to the Walton backwaters, where I spent a wonderful couple of nights, out of 33 nights spent on-board this season, beside a group of seals. Other enjoyable trips were visiting old navigation markers such as the Buxey Beacon or the Wallet Spitway.
On the 15th of October, the day after a mini cruise inside the Blackwater that can only be described as a creek sailor’s dream. I took her back through the Hatches for her layup which will no doubt be a winter of much TLC.
We are truly fortunate that the Blackwater estuary has so many creeks, waterways, inlets, beaches, islands and historic maritime villages which make it an ideal base for the cruising sailor. I hope you have all had an enjoyable season at Tollesbury Sailing Club. You certainly have your fair share of magical creeks close by.
All in all I could not have asked for a better first season with my new boat Shoal Waters. I have got to know her subtle little ways and already she feels like a part of me that I could not do without.
Let’s hope for some good sailing in 2012.
Tony Smith,
Creeksailor, gaff cutter Shoal Waters

Posted by Creeksailor at Friday, December 02, 2011 No comments: