As Shoal Waters began to float, I let go her mooring lines and began a gentle sail down river over the incoming tide. Beside Gore Saltings I found the wind was not blowing enough to push the old girl through, so I had no choice but to fire up the Iron Tops'l.

It was Friday the 1st of July and the East Coast Old Gaffers weekend meet had already started with a voluntary passage race to the Nass Beacon. This was to be followed by an early lunch at the old oyster Packing Shed, in Thornfleet Creek.
As I entered Thornfleet, many sails were raised and boats were already leaving for Brightlingsea, where the weekend gathering was based.
I was just able to motor sail over the spring ebb, up the creek, to land right beside the Shed where I stepped ashore to say hello to the remaining Gaffers.

I was soon off again, drifting down the creek in searing heat and still with hardly any wind.
Although I had decided to spend the coming three days and two nights in the company of fellow Gaffers, I had already thought about potential opportunities of reaching the head of one or two solitary creeks that can be found near to the Colne Yacht Club base.

Shoal Waters had been at the first 13 years Old Gaffers events, winning her race on the second year so it was a joy for me to be able to bring her along once again. Although she would not be racing it is a good chance to celebrate the glory of gaff rig, and just wallow among acres of traditional canvas.

Heading out towards the River Colne I found myself in company with a few other boats on course for the Cocum Hills beacon. With the pace this slow it is helped some by being able to admire a pretty yacht or a classic smack drifting/sailing nearby.

When East Mersea Church came into view on the high ground, I cut across the Cocum Hills heading straight for Brightlingsea Creek. There is a small creek along this stretch of the Mersea shore called Fen Creek. The creek is one of those remote, high tide creeks, that if coming to visit it from far up either the Colne, or Blackwater rivers you will probably have to go against the ebb to get back home.

It was not long before I was in the Colne and sailing up Brightlingsea Creek. On reaching the pontoons I dropped all sail as a water taxi came to greet me. I said I was with the Old Gaffers, upon which he kindly pointed where to raft and helped me get across the rapidly flooding creek.

Stepping from my own boat onto a pontoon is something that I have not done for years, so it felt strange not having to reach for the wellies. As did paying a water taxi to take me over to the Yacht Club. Immediately I felt a yearning for the more familiar muddy marsh-lined bank to scramble up. After a fish and chip supper washed down with a few beers in the club house all was well though, and I retreated to the boat (via water taxi). The immediate neighbours were very nice people who had came from Bradwell marina, and we chatted until way after dark.

The following morning I made way down the creek, passing Bateman's Tower where the guns fired off the start of the race. There was hardly any wind but those carrying tops'ls seemed to glide magically to the front, and beyond of the fleet. After a slow start the sea breeze kicked in for the sail back to the Blackwater to round The Nass and back again.

Returning to the Colne, boats began mooring along the pontoons again but the wind was now just perfect for a spot of creek-crawling. I would not be 'pontooning' it tonight, no, enough of civilities, pomp and pageantry. With this wind I was able to sail along the eastern stretch of Brightlingsea Creek past the moored boats and took off, up St Osyth Creek.
Something that constantly amazes while cruising the East Coast is the ability to move in a very short time, from a very busy stretch of waterway, to an almost millstream waterway without a soul in sight.

While crawling along St Osyth Creek it can be hard to think that there is life at the top of this little winding waterway. The creek has many turns, where Shoal Waters became stuck once or twice, which is all part of the fun of Creeksailing.

I was able to reach the Mill Dam at the very top of the creek. The last bend before the handful of finger mud moorings has a small, low lying port marker staked into the bank, this is hardly noticeable but which you have to keep very close to indeed. This was pointed out to me by a mooring holder shouting and waving frantically to warn me I was crossing a 'fools only' shallow area. He could not have noticed the sounding cane waving wildly beside me, signalling I was in 18 inches of brine.
A special treat for me was to see Edme sitting beside the Mill Dam. This was the icing on the cake, there were other craft dotted about but her sitting there allows you to glimpse at another time, she made the whole scene.

Water does not stay long at the top of the creek, but I had decided to creep back down, through its playfully sticky bends. To think barges still come up and down this tiny creek! I passed Pin Cushion Island and back into Brightlingsea Creek. Being such a beautiful evening I sailed inland, along into Flag Creek. As well as avoiding mud shoals, motor skis play along here, but Shoal Waters was again in familiar grounds, and keeping to the withie markers was able reach the derelict Wellwick Wharf, which once handled sand and gravel.

I was tempted to dry here for the night but stayed floating and made way back to Brightlingsea Creek and the pontoon pageantry opposite the yacht club. With many boats packed alongside I sailed into the shallow water of the hard to drop anchor. Drying here will allow me to use my own taxi dinghy in the form of size eleven waders.

I was soon in the smack dock sipping fine cider and ale among fellow Gaffers again. This was folowed by an evening in the clubhouse bar.

Fully topped up with refreshments I was able to use my 'taxi waders' again to climb aboard for a sound night.

The early morning tide took me out along the coast to Clacton pier, stopping on the way at the two Martello towers that can be seen along Jaywick. The Jaywick Martello Tower is over 200 years old and is one of 103 towers, built to repel invading Napolean armies.
This tower has been restored with a glass observatory on its top, for the view across the wallet alone it is worth visiting. Another interesting note is that the 750,000 thousand bricks used to construct the tower were delivered by coastal sailing barges. 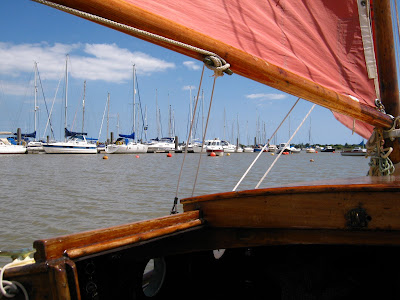 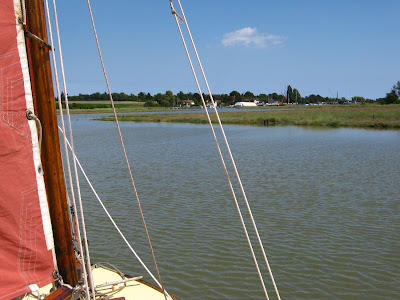 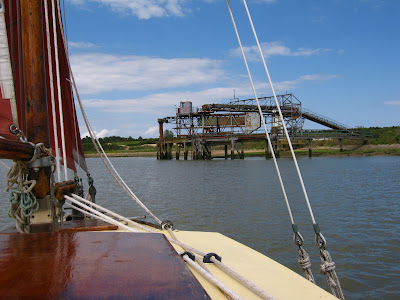 Gliding through the fleet with full Tops'l 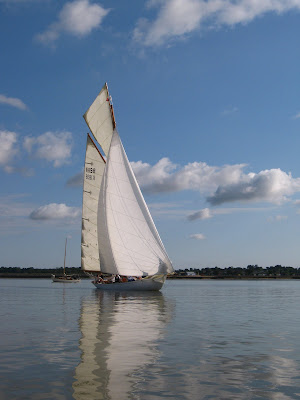 The Glory of gaff rig sailing, heading towards the Colne 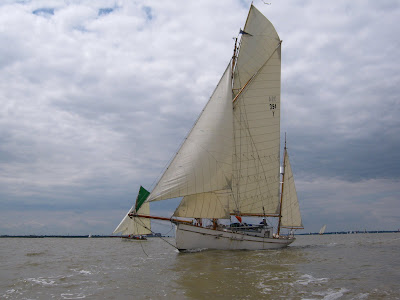 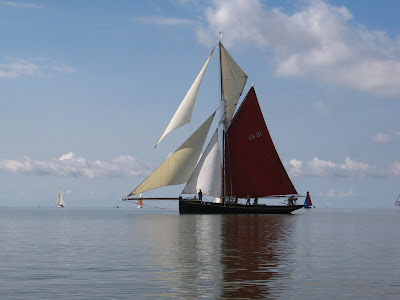 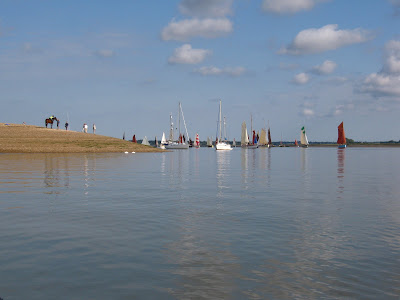