St Peter On The Wall and Gunner's Creek

A few notes from a recent three day cruise I undertook in the foot steps of eighteenth century smugglers.
On leaving my mooring in the creek I was able to navigate Deadmans Creek in both directions before exiting the creek at the very shallow East Point. Continuing on a leisurely meander down to Bradwell Creek was had. Turning to Starboard at the Tide Pole Huffler was sailed into the creek and past the marina.
With a pint in the Green Man waiting I wiggled back through the moorings, running Huffler up onto the sloping mud bank beside the withering poles of the former barge dock.

After dark Setting sail again for a midnight passage alone under moonlight.
My final destination was the tiny Gunner's Creek.
The creek is reached by a high tide passage out of the river mouth and a turn south, over the shallow mud flats. A remote creek but with such a special atmosphere. Also a very narrow creek and sits below the chapel of St Peter On The Wall, as well as Wild Fowler Walter Linnets former cottage.
A fabulous night was had here. Definitely not for the faint hearted (even more so at night) as there are many obstructions beneath the shallow breaking seas at high water but well worth the effort to reach it.

The full account of this magical cruise including the moonlight passage can be read in the Creaksailor book. 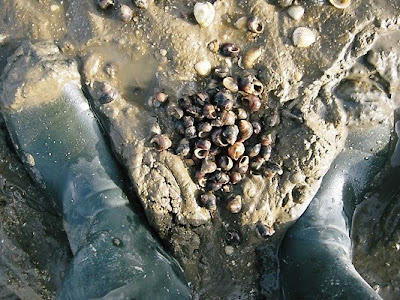 Posted by Creeksailor at Friday, September 24, 2010 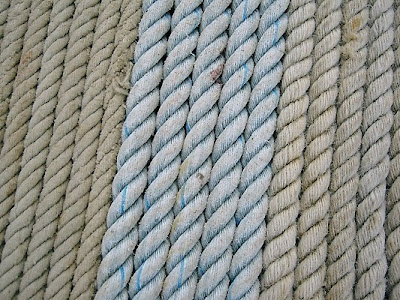 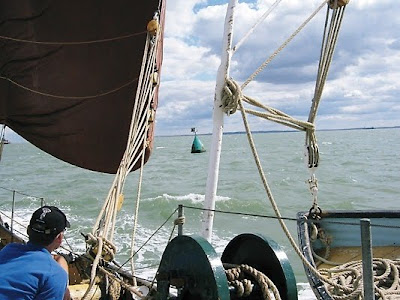 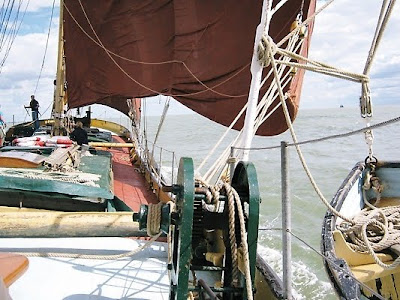 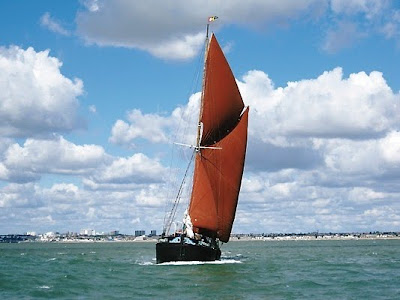 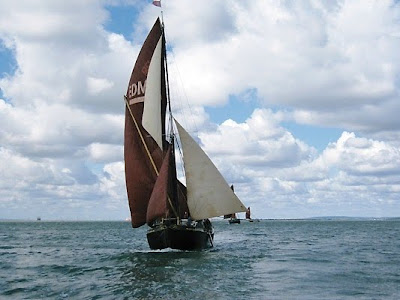 Share your cruising experiences through my guest writers page.

The piece below is kindly written for us by fellow Blackwater cruiser 'Swallow' (pen name)
describing Swallow’s experience one day in the mid 1990s.


Many thanks for the article Swallow. TS


Some summers back on a high spring tide, Swallow and I took the ebb and sailed down the Blackwater past Bradwell and out to Bench Head. With no definite plan in mind we ran back with the easterly wind against the tide and anchored up in Thirstlet Creek. By this time the shell banks were well exposed and the creek was emptying fast.
I rowed the dinghy to shell spit taking my metal detector with me and was surprised to find quite a lot of Aluminum. This was all in fairly small pieces, very crumpled and badly corroded, but there seemed so much of it. It made me wonder where it could have come from!
For those who don’t know, when the tide goes out, it leaves a large shallow lagoon within the shell banks, deep enough to float the dinghy, and a very safe bathing and paddling pool for kids. Make sure the children have water shoes as the shell bank has no respect to bare feet. Pick the right tide, the right day and you couldn’t find a better spot for a picnic, exclusively yours providing no one else has the same idea. If you do go to the shell banks be sure to take a couple of decent sized buckets with you. That is if you like seafood. One bucket for oysters, the other for mussels. A couple of delightful hours will soon pass as you browse the banks, make sure you also take the sun cream, especially for the children, I nearly fried the day I was there.
The Blackwater water is classed as “Class 1 Water” by the Environmental Health Agency, or was when I worked for the local Oyster Company, but this can change of course, they used to take sample oysters every month from various locations within the river for testing. This means the mussels and oysters you glean can be eaten straight from the sea. All oysters sold by the local Oyster Company have to be purified for 24 hours in special facilities to comply with “European Law”. Please note, you eat at your own risk, Swallow takes no responsibility for any tummy upsets.
After my metal detecting, no Saxon gold alas, I noticed a large black lump appear as the tide receded over towards the salting and further up the creek. Intrigued, I dumped the detector back on Swallow then rowed up the creek and over towards the mysterious object. The dinghy grounded so I left it where it was and waded bare foot through crystal clear warm water to the object. Being of a certain age, I recognized it at once as being the remnants of a WW2 V2 rocket motor. It was intact, the combustion chamber still perfectly round, terminating in the large flared outlet cone. It was heavily encrusted after all those years and well embedded in the creek bed, but you could see right through it. You could make out quite a bit of detail, pipe wrapping round part of it and various openings here and there. It is in a very delicate condition after all these years and crumbles to the touch. There were some loose bits of it lying about and I took a small piece home, but this turned to dust when it dried out in my workshop. It’s beyond salvage now sadly, as it would make a unique BBQ stand if it could have been retrieved. For anyone looking for it, it’s located on the North shore of the creek approximately opposite Stone Sailing Club to the South, it only shows at very low tides. At the time I had no camera with me, and to this day I don’t possess a GPS, but it’s over there somewhere near where I have described.
Returning to my dinghy, I refloated it and rowed up the creek as far as I could. Further up I could see things sticking up out of the water, so waded up in their direction to investigate. The objects turned out to be the remains of an old steel Target Barge, blown to pieces either by very accurate bombing or purposely destroyed after the war. The outcome is horrific, with jagged metal distributed over a large area, the main piece being the stern post which is about five feet high. Having sailed from Stone since 1965, I have always been aware of this hazard and avoided the area, as it can easily be seen at low water. I cannot believe it remained unmarked for so long, as the two Red Marker Bouys have only been introduced quite recently.
As I was wading around the debris in ankle high water, the water was teeming with grey mullet. I don’t know whether they were spawning or just enjoying themselves, as some were leaping out of the water and others water skiing on their sides with tails thrashing. There were many hundreds swimming around and it was a spectacle worthy of a David Attenbourgh film. Although they were brushing against my feet, trying to catch one was impossible, they were all about eighteen inches to two feet long, extremely slippery and mega fast. As I have said I had no camera to record the incident but the memory is indelible printed in my mind.
By the time I had finished watching the Mullet at their play, the tide had turned and my dinghy was floating up towards me. I rowed back to Swallow, changed into my trunks and enjoyed a wonderful swim in the new flood tide . Invigorated once more I sat and watched the tide come in for an hour or so before hoisting sail and beating back out of the creek and rounding that big green bouy and running back to our mooring. When I described my experience in Thirstlet, the Thirstlet Bouy was much bigger than the one there now, the new one being a mere shadow of its predecessor. 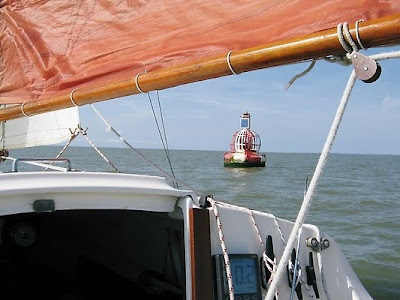 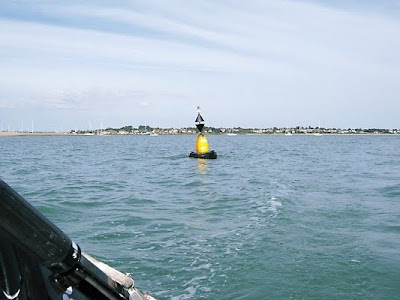 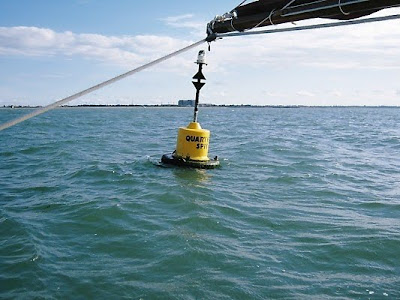 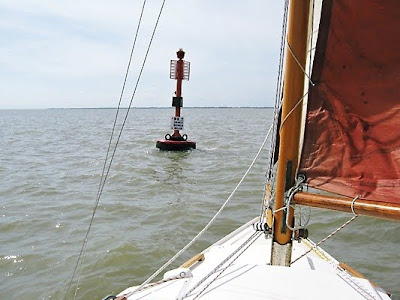 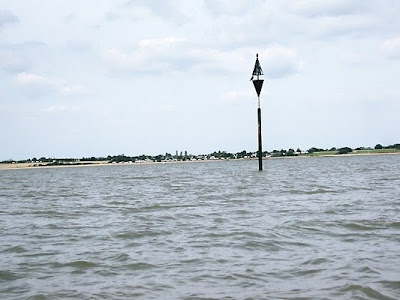 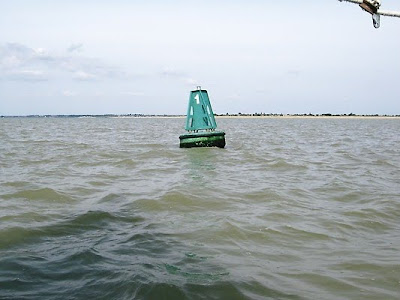 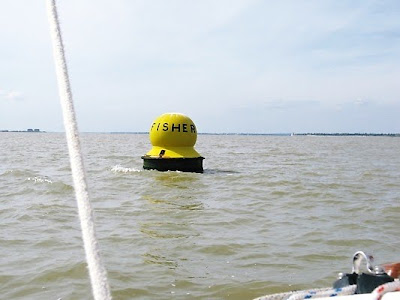 Posted by Creeksailor at Sunday, September 05, 2010