This Grade 1 listed building was built in the 15th century as a private home to the Darcy's.
The Darcy family were very wealthy indeed. At the time most houses would have been built using wood so this towering brick built structure with turrets an-all would have been very imposing.
Interestingly the Darcy's later sold up and moved to another historic building called St Osyth Priory, a building full of history and character that can be found at the top of St Osyth Creek.

Moot Hall has since been occupied by various owners and in the 16th century became a jail when it was used by local authorities.
By the mid 19th century the Hall had a prison cell with exercise yard and had become the local police station. The floor above had by now become the court house.
The Borough Council went on to use the building up until the mid 1970's, before moving to a purpose built building nearby. On the buildings top floor charters of all the Kings and Queens dating back to 1300s hang from the walls, beneath them oak furniture and desks including ink-wells sit on display as it was left by council officers after the last day of use.

Of particular interest was the jail and exercise yard. Prisoners, many of whom would have been visiting drunken sailors, were literally thrown after being manacled, into the tiny brick-built hole of a cell.

The brick walling of the exercise yard itself holds many stories. The mid 1800s being a very popular time here. Some of the prisoners of the era were well educated, being able to scribe very neatly indeed their names.

Climb the steeply spiralled steps to the very top of the house and a small wooden door opens onto the roof terrace. At this point I wished for blue skies (but then I would be sailing) as the views down the high street, across pan-tiled and patterned roof tops reach far and wide. On a clear day it just may be possible to discern St Osyth Priory from here. Northey and Osea stick out quite clearly as does Mundon, Colliers Reach and Heybridge. Even Byrthnoth can be made out on the Promenade.

The graffitied walls of the enclosed exercise yard show this chap had more than a few hours spare. His choice of font typical of the period.
This would have been in the days of tall ships, colliers and brigs coming up river from all corners of the British Empire 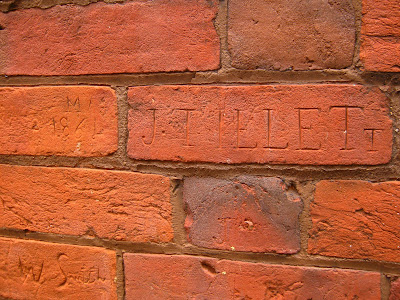 A picture of a musket gun etched into the brickwork by a pirate or smuggler? 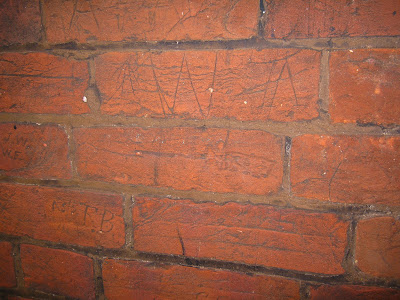 The basic facilities would have been enough to sober up any drunken sailor. 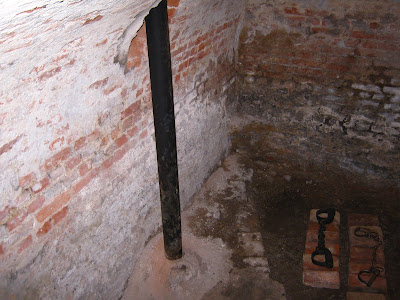 The sailors lot. His only view from the high enclosure of the brick walling.
A spiral staircase, the lower part brick built by Dutch craftsmen, leads you from the ground floor, all the way up to the top of the turret. 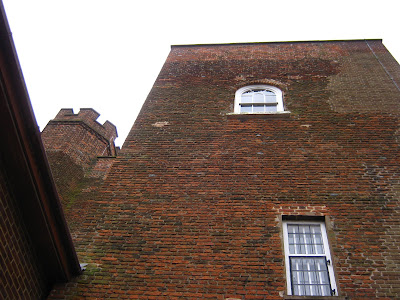 The exercise yard and its gate is right beside the cell 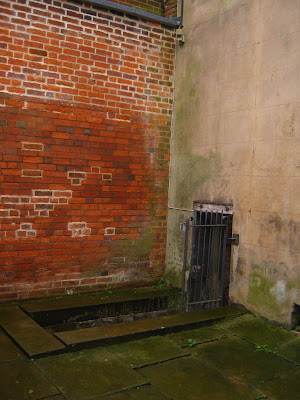 The view from the top is for guests of today - and is not bad at all. Maldon's interesting high street is lined with Geogian facades and history can be found behind most of the streets doorways. 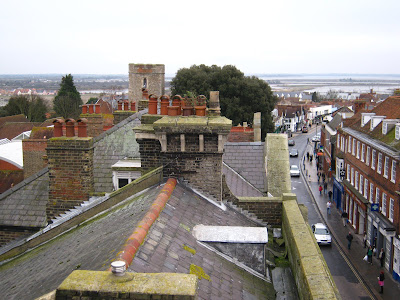 A clear day would show the open sea but barge Nellie can be seen moored in Colliers Reach, and masts point up from The Hythe. The house on Northey stands out clear enough. Osea's western point can also just be made out 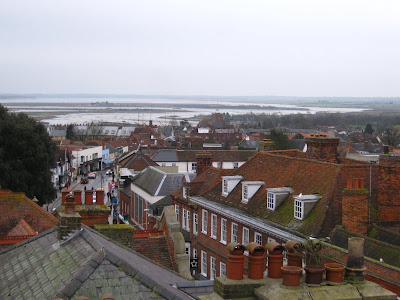